Carrying from one domain to another or within the public domain is one of the 39 categories of labor prohibited on Shabbat.  However, Torah law also recognizes the concept of an Eruv.  An Eruv permits designation of a neighborhood or citywide district as one large private domain, within which Jews may carry on Shabbat.

An Eruv is established by buying the rights to establish an Eruv from the local government and by creating a physical border around the district.  The city councils of Minneapolis and St. Louis Park and the Hennepin County Board of Commissioners have adopted resolutions and sold the necessary rights to Eruv of Minnesota.

Under Torah law, the borders of an Eruv can be established by creating a continuous series of "doorway images".  As in most American cities, our Eruv is established largely by using existing utility poles and lines; the poles are the sides of the doorway, and the wires are the door lintels.

The area included is about one mile square of Minneapolis and St. Louis Park, including several synagogues, Torah Academy and Menorah Plaza. A rabbi will inspect the Eruv each week to ensure that it may be used. Each Friday afternoon, local residents should call (612) 640-ERUV (640-3788) for a recorded message of the Eruv's status.  In addition, synagogues in the area are asked to announce each Friday evening whether the Eruv may be used.

For more information and a map of the Eruv, visit www.baisyisroel.org/map_of_minneapolis_eruv.htm 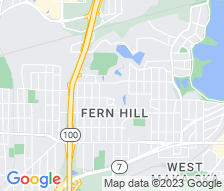