Several Jewish congregations have cemetery sites within a common fence at Barclay and Maryland in St. Paul. There are three gates, leading to separate cemeteries:

The northernmost gate leads to the older section of the West Side Hebrew Cemetery, containing the rows north of the road and about 6 rows to the south of the road. It was originally incorporated in 1883. This portion also includes the old Russian Brotherhood Cemetery. In the NE section of the site is the Adath Yeshurum Cemetery, since 1985 a part of the West Side Hebrew Cemetery.

The middle gate provides entry to the Sons of Abraham Cemetery (originally called B'nai Abraham). The congregation was established in 1894. In 1901 the congregation purchased property at 10th and Minnesota for a synagogue. They used the Russian Brotherhood cemetery until they bought their own land in 1911. Their first interment was in 1916. This section is about half an acre with 600+ burials.

The southernmost gate leads to the newer portion of the West Side Hebrew Cemetery. The rows south of the road and about 8 rows north of the road are part of this cemetery. The cemetery was connected to four congregations, which merged in 1963 as Adath Israel Synagogue, 2377 Edgcumbe Road, St. Paul, 55116. The congregations were the Highland Park minyan, Agudas Achim, Chevra Michnal Ashkinaz, and Sons of Israel. The cemetery records can be requested by mail at:  West Side Hebrew Cemetery, 2575 Doswell Avenue, St. Paul, MN 55108. 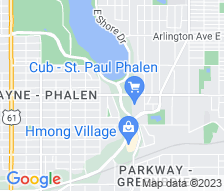