The Letters Project: A Space For Youth To Wrestle With Israel/Palestine

"One of the most amazing and impactful classes I’ve ever taken.”

“A chance to learn from an engaging book, other Jewish teens, and rabbis in the community.”

“An amazing opportunity to strengthen support for Israel by learning to critique and disagree with some of its actions.”

These are just a few of the comments offered by Jewish high school students who recently completed The Letters Class: Conversing Across Narratives, a six-week course based on Yossi Klein Halevi’s book, Letters to My Palestinian Neighbor: With an Extensive Epilogue of Palestinian Responses.

Organized by the Jewish Community Relations Council of Minnesota and the Dakotas (JCRC), the course was the brainchild of Holly Brod Farber and Sally Abrams, co-directors of The Letters Project and JCRC’s Speakers Bureau.

Brod Farber explained that a year ago, she and Abrams began thinking about “how to address a vexing problem we hear about from our Jewish youth — that our Jewish institutions don’t give them a safe space to grapple with the complex reality of Israelis and Palestinians in a compassionate way.”

After a review of many different teaching options, Abrams said that Klein Halevi’s book stood out as “The Tool” for the job. The book is comprised of 10 letters, with response letters from Palestinians added in the epilogue. Brod Farber and Abrams developed The Letters Project, a letter-writing contest based on a deep reading of the book; the online Letters Class is an outgrowth of the Project.

The curriculum for the course was written by Carl Schrag, an educator and journalist who has worked with Camp Ramah of Wisconsin to create immersive Israel education for staff and campers. The curriculum’s approach is to go back and forth between the Israeli and Palestinian narratives, making the two sides virtually talk to each other.

Brod Farber said that JCRC expected eight to 10 students to participate in the course, but demand was much higher than expected, and 28 students enrolled. Schrag feels this speaks to teens having a real abiding interest in thinking critically about their personal relationships with Israel.

To create The Letters Class, JCRC partnered with the Talmud Torah of St. Paul, the St. Paul Jewish Federation, and synagogues across the Twin Cities. Abrams noted that this course was an opportunity to create a “truly collaborative learning space.”

Six rabbis from five different congregations taught the classes. Rabbi Jill Crimmings of Bet Shalom Congregation in Minnetonka said she felt “heartened” by her work with this project.

“We hear talk about young people disengaging from Israel,” she said. “I was so impressed by how deeply the students wrestled with a love for Israel while holding the ability to be critical of Israel. That’s hard even for adults, so seeing it in teens gives me hope for the future. That’s what we want!”

Rabbi Adam Rubin of Beth Jacob Congregation in Mendota Heights, said that he, too, was struck by how remarkably mature and self-possessed the students were. “They handled different narratives, nuance, tension — concepts that can’t all be tied up in a neat bow.”

Rubin added that if Jewish education only presents “a flat, totally upbeat, unrealistically glowing depiction of Israel,” Jewish teens may rebel and won’t be equipped for the anti-Israel agenda they hear in college.

Justin Held, Director of Education for Herzl Camp and Minnesota Hillel, organized book discussion groups for Herzl staff and for Hillel college students. Talmud Torah of St. Paul, led by Director of Education Heidi Tarshish, helped with registration and marketing for the project. The St. Paul Jewish Federation provided $180 stipends to students who completed the course and underwrote the cost of  developing the curriculum. Funding came from the E. David Fischman Trust, which is administered by the Federation.

“Educating about Israel is one of the goals of the Fischman Trust,” said Ted Flaum, CEO, St. Paul Jewish Federation. “We were excited to be part of this project because it fostered greater understanding about Israeli-Palestinian relations while providing an opportunity for young people to engage with this subject openly and authentically.”

The Letters’ Project curriculum will be used this summer at Herzl Camp and Camp Ramah. JCRC currently is exploring additional ways to expand The Letters Project’s curriculum to meet a critical need in the community. “We’re helping Yossi Klein Halevi reach his intent,” Brod Farber said. “This is the best, most impactful and powerful work we could be doing.”

Said Steve Hunegs, JCRC executive director, “The Letters Project is new, it’s working, and it can be the future.”

Marilyn Leder Ruby is a journalist who has worked primarily in the Jewish communities of Milwaukee and St. Paul. She has won three Rockower Awards for Excellence in Jewish Journalism from the American Jewish Press Association. 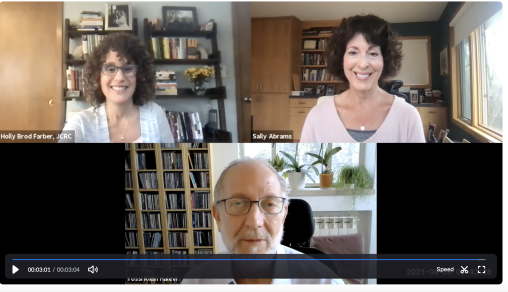 Author Yossi Klein Halevi writes for leading op-ed pages in North America, including the New York Times, the Wall Street Journal and the Los Angeles Times. He is frequently quoted on Israeli and Middle Eastern affairs in leading media around the world and is one of the best-known lecturers on Israeli issues in the American Jewish community. Speaking from his home in Jerusalem, he explained that he had two specific audiences in mind for this book.

He reached his first audience, his Palestinian neighbors, by publishing the book in Arabic the same day it came out in English, and by offering free downloading in Arabic. The paperback edition of the book that was published in 2019 contains letters from Palestinians written in response to the book.

While the book has been translated into about a dozen languages and has international reach, Klein Halevi noted that The Letters Project in the Twin Cities is a pioneer in working with the book.

“This is exactly what I was hoping would happen,” he explained. “This project that originated in the Twin Cities is the incubator for everything I hoped would be achieved in America.”

Klein Halevi participated in the final class, which he said was a powerful experience for him.  “The greatest gift a writer can have is serious readers. This project has given me a growing number of them. They read the book critically and don’t necessarily agree with everything they read. That’s exactly what I was hoping for.”